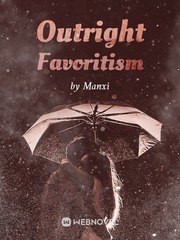 What is Outright Favoritism

Outright Favoritism is a popular web novel written by the author Manxi, covering Contemporary Romance genres. It's viewed by 229.7K readers with an average rating of 4.64/5 and 31 reviews. The novel is being serialized to 40 chapters, new chapters will be published in Webnovel with all rights reserved.

The engagement of the most adored daughter of the Li Family was broken off. Her furious family members railed against the heartless man and vowed to make him pay the price. * Later on, Li Qiao met her ex-fiancé’s big brother by chance. Some said he was the most mysterious man in Nanyang and his name was Shang Yu, aka Shang Shaoyan. While some others called him the overbearing and obsessive underground Overlord of Nanyang from whom everyone should stay away. Standing in the misty rain, Li Qiao gazed at the ruthless and untamed man with a shallow smile, said, “Hello, I’m Li Qiao.” She would become her ex-fiancé’s sister-in-law, if not wife. * Li Qiao and her ex-fiancé met again on the street several months later when he sneered at her, “Are you following me? Haven’t you given up hope yet?” A harsh voice berated him from behind, “Show some respect to your sister-in-law!” From now on, only one rumor was circulating in Nanyang City – The merciless Overlord of Nanyang had one woman he uncritically doted on. Her name was Li Qiao.

Bigoted Mr. Fu Lets Me Do Whatever I Want

Five Villain Daddies Are Fighting To Spoil Me

The Reincarnated Goddess is Fierce