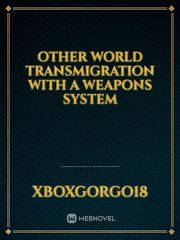 Other World Transmigration With A Weapons System

What is Other World Transmigration With A Weapons System

Other World Transmigration With A Weapons System is a popular web novel written by the author Xboxgorgo18, covering MODERNWEAPONS, REINCARNATION, ISEKAI, FANTASY, Fantasy genres. It's viewed by 34.1K readers . The novel is being serialized to 5 chapters, new chapters will be published in Webnovel with all rights reserved.

Jacob Johnson, an 18 year old Airsoft enthusiast, was on his way to California to try his luck being one of the winners in the Airsoft Players' Choice Awards with his pickup truck. However, fate has other plans when suddenly a lone child that's unnaturally white all over ran through a red light directly in his way, turning his truck by reflex he went straight into a truck on the opposite lane before seeing darkness. When he opened his eyes, he met a being that calls itself "God". "God" says he will grant him the chance of reincarnation in another world due to one of his children's mischief with a little aid. Will Jacob, grow to enjoy his fortune or will he be washed up in the controlled chaos of the Divines?

"Peaceful" Life in a Different World