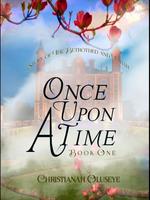 Once Upon A Time (Story of The Betrothed and Farah)

Once Upon A Time (Story of The Betrothed and Farah) is a popular web novel written by the author wild_imaginatorII, covering Fantasy genres. It's viewed by 92.4K readers with an average rating of 4.9/5 and 20 reviews. The novel is being serialized to 46 chapters, new chapters will be published in Webnovel with all rights reserved.

Of the same blood, Pure and royal, The kind who doth, Looketh not, but seeth through, Bound together, Made to be one, Oh what havoc, When the first snow comes! *+*+*+* An uninterpreted prophecy, A missing prince, A lost princess, A cursed kingdom And forbidden love... The perfect recipe for havoc. Farah happens to be the only one that can break the curse of the princess of Näruniä's Betrothed kingdom. Something happened in the past causing the prince of Tä-rinia to go missing the day after he was Betrothed to Nä-ræl - the princess of Näruniä, some days after his own sister was missing. Eighteen years later, the prophecy is interpreted. What would happen if the lost prince and princess is found? What would happen to the love between Nä-ræl and Rapha? What would happen to the cursed kingdom? And more importantly, what would happen to Näruniä? Only Farah knows, because she is the chosen one of the gods in the land of mortals.

Center Realm: The Girl and Her Glowing Necklace