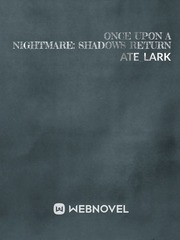 Once Upon A Nightmare: Shadows Return

What is Once Upon A Nightmare: Shadows Return

Once Upon A Nightmare: Shadows Return is a popular web novel written by the author ATE_LARK, covering ADVENTURE, DRAMA, LGBTQ, ANGST, HUMOR, TRAUMA, TORTURE, SWEARING, SLIGHTROMANCE, SUCIDEATTEMPT, Fantasy Romance genres. It's viewed by 4.2K readers with an average rating of 0/5 and 0 reviews. The novel is being serialized to 13 chapters, new chapters will be published in Webnovel with all rights reserved.

Just this morning, I had a fight with my mom. A pretty scathing one, if I do say so myself. I thought that was it; that there was nothing else left for me. Who would've thought I would need to save an entire other civilization just a week later? 17-year-old Kelsey's life blows; she's a bi teenager in Florida living in a tiny can of a trailer with her... problematic mother. She doesn't think it could get any worse. Until she has to save a planet. But don't worry; with the help of an egotistical-wizard-elf boy, his equally freaky, hippie sister, her confused, water blob of a companion, an over-sized lizard and a tired piece of chocolate with wings, nothing could go wrong. Right? Hop on aboard the Illagury express as we follow Kelsey and her fucked-up friends through the adventure of their lives. *WARNING: This story contains crude language and harsh descriptions. Be prepared to feel depressed and maybe become impossibly attached to these characters*