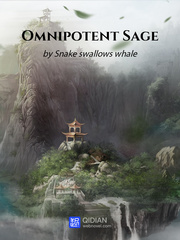 What is Omnipotent Sage

Omnipotent Sage is a popular web novel written by the author Snake swallows whale, covering REINCARNATION, CULTIVATION, MALE PROTAGONIST, BLOODLINES, ACTION, BODY TEMPERING, Eastern Fantasy genres. It's viewed by 4.3M readers with an average rating of 3.78/5 and 295 reviews. The novel is completed and can be read all 897 chapters in Webnovel with all rights reserved.

Invincible fists, unrivaled hammers! Junior Leopard, who traveled through time and space, takes what he earns and does only what he needs to do, never undertaking too much responsibility nor being so chivalrous as to do every good deed. His so-called ambitions from his past life to change the world were cast aside. However, when a forbidden bloodline awakens in his body and his eternal eyes begin to shine once again, he discovers that his iron fists give him the power to force others to follow the truth and to reforge justice! This is a cultivation legend about a modern man that was thrust into an amazing martial arts world.

The Spiritual Attainment of Minghe

Pursuit of the Truth