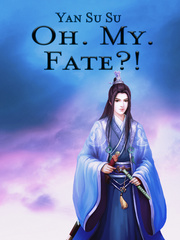 Oh. My. Fate?! is a popular web novel written by the author yansusustories, covering BL, YAOI, LGBT, REINCARNATION, COMEDY, DRAGON, SLOW ROMANCE, DEMON, SHOUNEN AI, GOD, LGBT+ genres. It's viewed by 4.8M readers with an average rating of 4.4/5 and 99 reviews. The novel is being serialized to 1263 chapters, new chapters will be published in Webnovel with all rights reserved.

Jing He, crown prince of the nine heavens, has to descend to the mortal realm to weather a human life full of vicissitudes. Each event carefully crafted by fate's scribe, Shun Tao, nothing should go wrong. Just that Qiu Ling, king of the dragon race, follows him. Incapable of watching his lover's suffering he intervenes and plunges the carefully scripted plot into chaos, resulting in a fate that none of them ever intended. A slightly humorous cultivation novel with a handsome yandere dragon, a god ready to quit his job by chapter 3 and a god-turned-mortal, who is still blissfully unaware of everything. Well, that's just how fate is ¯\_(ツ)_/¯ Release schedule: 1 chapter daily You can find the revised version of this novel, as well as OMF's prequel "Romancing the Son of Heaven: The 69 Stratagems of Dragon King Qiu Ling", on my website www.yansusustories.com