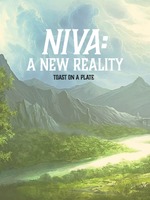 What is Niva: A New Reality

Niva: A New Reality is a popular web novel written by the author Toast_On_A_Plate, covering ACTION, REINCARNATION, SYSTEM, WEAK-TO-STRONG, GAME ELEMENTS, AMNESIA, Fantasy Romance genres. It's viewed by 26.3K readers with an average rating of 0/5 and 0 reviews. The novel is being serialized to 20 chapters, new chapters will be published in Webnovel with all rights reserved.

YEAR 5506, a new technology is released which is called Niva. For hundreds of years since the founding of the new genre IEVR, developers have pursued the goal of achieving a full reality experience, a true IEVR. The leading company in this genre released the first groundbreaking technology which started the IEVR Era. The Immersi-00 immediately sold out like hot cakes, but in the end they could only reach a realistic experience of around 60%. Whilst most gamers were still very happy with this, hardcore and pro gamers were looking for something more. Enter RealiChek, a new company that has no previous gaming history, who released the next step in the IEVR Era. The Niva technology which had one exclusive game that is set in the world of Niva. (IEVR stands for Immersive Experience Virtual Reality) - Isabella has amnesia and she has been in a coma for several years now. Her parents are still devastated till this day, and they signed on a project the hospital has been working on. Which is to send her into the world of Niva. But of course they had to sign a contract. - I hope I can make this novel different from the other ones that are in this area. FYI, Belle does not know anything about herself when she first plays this game. Not her name, not her appearance or even her gender. Hope you enjoy as 'Belle' experiences this world that she will enter.