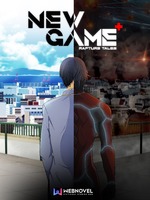 What is New Game+

New Game+ is a popular web novel written by the author Rapture_Tales, covering REINCARNATION, WAR AND MILITARY, ACTION-ADVENTURE, TIME-TRAVEL, ALIENS, APOCALYPTIC, SMART-MC, ACTION, CUNNING MALE LEAD, PSYCHLOGICAL, Sci-fi genres. It's viewed by 2.4M readers with an average rating of 4.46/5 and 142 reviews. The novel is being serialized to 259 chapters, new chapters will be published in Webnovel with all rights reserved.

An alien race invaded the Earth on June 6, 2128. At the midst of this war, many nations allied with the alien threat and the war nearly wiped out the rebelling humans of the planet. At the edge of mankind's survival, the United Nations Army launched its forces to eliminate the immediate stellar threats that loomed over Earth. General Seeker Carlean, commander and leader of the mission, risked and gave his life to destroy the immediate stellar threat. The battle was won though Earth lay in ruins. Perhaps mankind will live to see a few years of peace before the alien threat returns to wipe out their existence. At the immediate aftermath of the stellar battle, the fallen Seeker Carlean awakens and finds himself at aged 17, living the peaceful life he lived 16 years before he died. So begins a new game in the battle for humanity's survival. ---- Cover art by Jayps. http://www.behance.net/Jayps