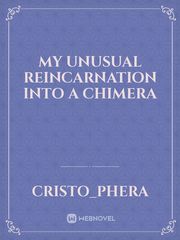 My unusual reincarnation into a chimera

I was a normal 16 year old girl with the class of [villager] and was on my way to the [adventurers guild] to become an [adventurer] but on my way there I was abducted. When I awoke I found out that I was about to be one of the test subjects for a group called the {NEW DAWN}.My soul was transferred into the body of a chimera and used for further experiments. Something went wrong and I found an opportunity to escape however when I got outside I found myself in one of the most dangerous forests called the {Labyrinth Forest of Rize}. Now I become stronger by eating monsters and evolving to have the strength to get my revenge on the group called the {NEW DAWN}.