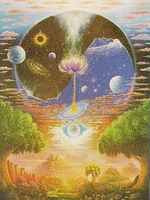 My Path is an Evil One

What is My Path is an Evil One

My Path is an Evil One is a popular web novel written by the author resin, covering ATG, OP MC, OVERPOWERED MC, CULTIVATION, DEMONS, GODS, DAO, IMMORTALITY, IMMORTALS, MYTHICAL BEASTS, Fantasy genres. It's viewed by 3.1K readers with an average rating of 0/5 and 0 reviews. The novel is being serialized to 1 chapters, new chapters will be published in Webnovel with all rights reserved.

Six Paths to reincarnation. Hungry Ghost, Asura, God, Demon, Myriad Self, Mortal. Only a select few on Earth would ever achieve the requisite karma over their myriad reincarnations to undergo a mutation to gain a Six Paths soul, and upon doing so they would be able to select one or more of the paths to gain that path or paths' unique ability in their next life, depending on how much karma they gained during their lives. Xi Lu had lived a contented life on Earth however he died in a freak car accident when he was 20. Shockingly in this last life he had supposedly managed to accumulate the final bit of karma needed to gain a Six Paths soul, and not only that he had accumulated enough to gain four paths' abilities! Armed with these advantages Xi Lu reincarnated into one of the other 3000 Lower realms, the Sinflame realm, with the Earth having been the lowest of the 3000 realms where the Qi was too sparse for cultivation to take place. Armed with his incredible talents bestowed upon him by his Six Paths soul and the four paths' abilities that Xi Lu was able to select as a result, Xi Lu began his journey, determined to find out the secrets behind the Six Paths reincarnation from Earth and in doing so, ascending to true supremacy in the wider universe of cultivation which had been revealed to him.