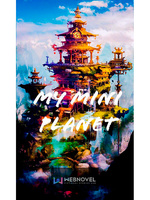 What is My Mini Planet

My Mini Planet is a popular web novel written by the author Poetic_Lord, covering UNIQUECULTIVATION, CULTIVATION, WEAK-TO-STRONG, FACTION BUILDING, ASSASSIN, BLOODLINE, Magical Realism genres. It's viewed by 510.8K readers with an average rating of 4.45/5 and 21 reviews. The novel is being serialized to 32 chapters, new chapters will be published in Webnovel with all rights reserved.

Reincarnated in another world, a cultivation Martial Universe where only the strong survive. Reborn as a prince, but with little avenges, Hammed wanders through the Realms, building up his legend as the most outstanding Assassin and Blacksmith ever seen. See as he becomes the most powerful expert, the Lord of All Things... Notes: • 7 to 10 chapters a week •Top 80: 2 extra chapters •The cover art isn’t mine, so all the credit to its creator.