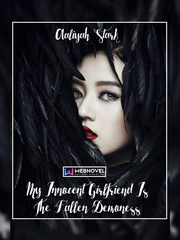 My Innocent Girl Friend Is The Fallen Demoness

What is My Innocent Girl Friend Is The Fallen Demoness

My Innocent Girl Friend Is The Fallen Demoness is a popular web novel written by the author Aaliyah_Stark_, covering SYSTEM, MODERN, LOVE, ROMANCE, FANTASY, CONTEMPARYROMANCE, ANGELSANDDEMONS, HUMANNONHUMANRELATIONSHIP, ROMANCECOMEDYFANTASY, Fantasy Romance genres. It's viewed by 255K readers with an average rating of 4.96/5 and 27 reviews. The novel is being serialized to 101 chapters, new chapters will be published in Webnovel with all rights reserved.

Winner of WFP #21 Descended down and her life changed completely. Warning: Mature Content The unrequited love is the most dangerous weapon for a Demoness and she would conquer anything just to win in her love. The story unravels in heaven, hell and human realm for Volca to go with the adventures and meet new people, but she forgets one thing. An origin that cannot be changed. And the fate had it twisted for her. Will Volca get the Angel she has been in love for really long or give up on him choosing a new beginning that could either destroy or make her life better? We must find that out. What is it that the Demoness wants in the end? And what will Volca have to go through for the treasures? The rollercoaster life of the innocent Demoness to mesmerize and sway one's heart. Excerpt: Volca stood in front of the door knocking. It has been hard to travel from the village to the city. Ever since he left that way, she has been going through a hard time. "Are you there?" she called him. When she went to his office they informed that he is on leave for three days. She grew upset, and tensed. She desperately wanted to see him, tell him the truth. She cried, regretting her words. When he failed to open the door, she knelt down and touched the door, leaning her head against them. She didn't know he was on the other side doing the same. "Don't leave me," she said in the end. When she did, he immediately opened the door and took her in his arms carrying her into his condo. She remained silent, still crying, holding onto him, lying her head against his chest. She could smell the cologne on him as usual. He settled her down on the bed and looked at her. "Why did you take so long?" he asked her looking eagerly into her eyes. "I was stupid and...." but before she completed, he moved his head face towards her, taking her lips on his. She gripped her tight on the bed spread while her heart exploded inside. He slowly deepened his kiss and got on top of her, pushing her back on the bed. He saw how tensed she looked but too precious at the same time, and he kissed her again. There was a mischief glistening in her eyes. And she turned him, getting on top. She smirked, tearing his clothes, and throwing them away exposing his ripped body. He was enjoying it. She leaned and locked her eyes with his. Both breathing hard." This novel is going to spin off of my first novel, On My Way: The Demon King Made Me His, I mean it takes place in the same universe but two different stories. The novel will here portray the true heart of a Demoness and her life, trying to find the things she was not assigned, and if you are hoping for some heart fluttering romance, mind swaying, emotional swirl and happy moments, You can definitely read this novel.

And It's All About You

Rebirth Of The Evil Vampire Princess