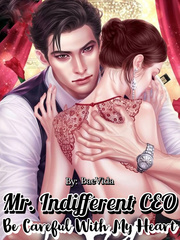 What is Mr Indifferent CEO, Be Careful With My Heart

Mr Indifferent CEO, Be Careful With My Heart is a popular web novel written by the author BaeVida, covering R18, ROMANCE, CEO, REVENGE, BETRAYAL, SECRETS, BEAUTIFUL-FEMALE-LEAD, HANDSOME MALE-LEAD, Contemporary Romance genres. It's viewed by 1.7M readers with an average rating of 4.6/5 and 50 reviews. The novel is being serialized to 167 chapters, new chapters will be published in Webnovel with all rights reserved.

{MATURE CONTENT! READ AT YOUR OWN RISK.} When we lose our hearts to the wrong person, setting a betrayal in place, how well do we come out from such hurt? Li Jing was the meek and loving, unwanted, adopted daughter of the Li family. For as long as she could remember, she had always been maltreated by her foster mum and sister because she was her adoptive father’s big secret. As though she hadn’t suffered enough, she had her heart torn in shreds by the betrayal of her fiancé and her sister. Ye Cheng was the cold and aloof, indifferent, charming CEO of the Dream Star Corporation, who had always lived his life in a simple way and cherished what life brought to him. One year later after returning to the country, to take over his family’s business, he had the one he loved kidnapped. In a bid to save her life, he lost her and was badly injured. What happens when these two people who life has played its tricks on finally cross paths? They both had a lot of secrets behind their past that they were oblivious to. When secrets finally became exposed, revenge became their only goal. What happens when a simple game to escape forced marriages blooms into something enchanting? Would she be able to melt his indifferent and cold heart and would he be able to accept the love she gave or will revenge be the only relationship between them? Find out how these two people would weave their fates with the thread of life, in a world filled with secrets, lies, betrayal, mystery, vendetta and love. MATURE CONTENT! THIS WORK IS FICTIONAL AND AN ORIGINAL! ––––––––––––––––– Cover not mine, all credit goes to the original owner. Cover edited by Ms¬_Anonymous Discord server: http//discord.gg/BH666ZK Instagram: felixlesah Discord: BaeVida#7167 Ko-fi: https://ko-fi.com/baevida