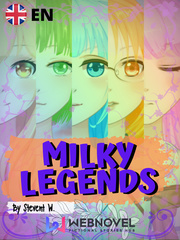 What is Milky Legends (English)

Milky Legends (English) is a popular web novel written by the author Stevent1679, covering ROMANCE, ACTION, ADVENTURE, MODERN, COMEDY, MAGIC, ISEKAI, SPACE, REVERSE HAREM, Sci-fi Romance genres. It's viewed by 161.9K readers with an average rating of 4.82/5 and 17 reviews. The novel is being serialized to 117 chapters, new chapters will be published in Webnovel with all rights reserved.

A Space Explorer, Anami Nina. Carrying out her duties as one of the Master Legends from Planet Herby to find the Creator's existence and The Godmote, a God's heirloom. Expose the rottenness of the ESDA and the Cosmos Government that deceived the Universe. Will Nina succeed? The story begins with the rescue of their comrades who seem to have been caught on Planet Guldish. Which is controlled by the ESDA Organization...

With You : In The Prevail Planet