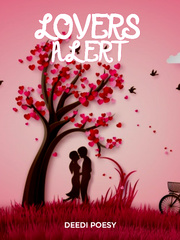 What is Lovers Alert

Lovers Alert is a popular web novel written by the author Deedi_poesy, covering R-18, COMEDY, ROMANCE, ACTION, MODERN, LOVE, Contemporary Romance genres. It's viewed by 16.2K readers with an average rating of 4.9/5 and 10 reviews. The novel is being serialized to 19 chapters, new chapters will be published in Webnovel with all rights reserved.

"How could you lie to me and use me in this manner? I got a text saying I passed the audition and got signed into the company's record label, only to resume work here as your messenger." Ella hissed at him angrily. "El..." "Don't even say my name! How can you be this mean? You said I would be your messenger for two weeks to know if I am qualified to work with your label. I obliged and it's the third week already. When you called earlier, I was expecting it to be about our contract. Only for you to call me to your office to send me on another errand." Ella said bitterly. She was fed up, and at this point she didn't mind losing her job, or better still, she'd just quit as she had planned earlier, since she knew he was likely going to fire her after she finished. She was glad she had her resignation letter in her bag since she had written over a week ago pending when the third week runs out and the CEO failed to give her the job she had auditioned for. "You know what? I quit! I'm not interested in working for you anymore, you're not sincere enough to be my boss." She said angrily as she took out her resignation letter from her handbag, dropped it on his desk and stormed out of the office. Henry's lips twitched in amusement as he watched her leave his office. She had always been too impulsive and hardheaded for his liking, Henry thought with a sigh. He knew she was going to return anyway, so there was really no need saying a word. Ella almost bumped into a young man who was going into the office, but she didn't bother to greet him, and walked past him with a stern expression on her face. The young man stared at her for a while before going into Henry's office. "Hey! Ella!" Henry's secretary called when she saw Ella walking away angrily, "I almost forgot, the CEO said you should be at the studio tomorrow by noon to begin your training for your first music." The secretary said making Ella stop abruptly. "What?" She asked with wide eyes. "Yes. Please don't forget." The secretary said before returning her attention to the computer in front of her. Ella's gaze darted to Henry's office door, and she almost collapsed when she saw Henry standing there like a devil, waving her resignation letter at her with a smirk on his face.

Fated To Love You

A Demon Of An Angel