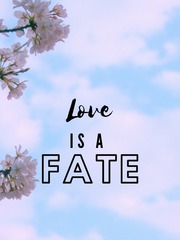 Love is a fate

It's is a fiction novel. With creativity. It happened like in 10 century. The earth is divided into 4 kingdoms. One is the Human kingdom, Demon kingdom(Cha dynasty), Fairy kingdom(soon dynasty), and angel kingdom(Kim dynasty).100 thousand years of revenge take place in this main character's life. They didn't even know that person who wants to make their life miserable. Every time when they were separated, They went no matter what they have to lose. Seo said, "Run!!".Bok run with her eyes closed with few guards and one baby in the west. Linlin ran to the east with 2 babies with few guards. Ha Eun, Ara, Ae cha and runs to them like fight so that living dead so made them ready with their sword. But after they came close to them Ae cha and Areum jumped above them and ran away. Ara fled away. Ha, eun stopped and shouted "why?? god !!" and ran away to the east. Unknown in a black cave said, "What just happened ?".