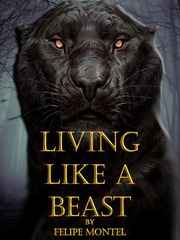 Living Like a Beast is a popular web novel written by the author Felipe_Montel_, covering MC-A-MONSTER, REINCARNATION, TRAGEDY, EASTERN-FANTASY, GOD-LIKE PROTAGONIST, INDEPENDANT MC, Fantasy genres. It's viewed by 3.2K readers with an average rating of 0/5 and 1 reviews. The novel is being serialized to 2 chapters, new chapters will be published in Webnovel with all rights reserved.

"In the great forest lies a mystery, Something never heard or seen. Some say it's a beast, for many have been slaughtered by him. In the great forest lies a mystery. For some it was born from fear, Fast as the wind and with sharp claws, it's attack is so fiercing as a point of a spear. And for the ones who think get into the forest, that think this's just a tale, not history, remember that the pain from a throat cut is the sorest and the deeper jungle remains a mistery." A short-tale told by an old woman to a pair of children in their bedroom, at the border of the far west of Marteine Empire on the 4th season of the year 1466 a.M.