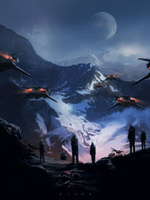 What is Lesson 1: Survival

Lesson 1: Survival is a popular web novel written by the author Silver_Material, covering ACTION, ADVENTURE, DRAGONS, FANTASY-ACTION, MAGICAL BEASTS, ELVES AND OTHER SPECIES, Fantasy genres. It's viewed by 125 readers with an average rating of 0/5 and 0 reviews. The novel is being serialized to 0 chapters, new chapters will be published in Webnovel with all rights reserved.

In the lonely dungeon of the top ranked Noble, a small boy with black fur, closely resembling a wolf, adorning his body and pointed ears on his head, was curled into a fetal position as he shivered from the piercing cold. All hope seemed to fade away from the boys eyes as he closed his frost covered eye lids, succumbing to his fate, when he heard a clash of metal and a sickening thud outside of his cell.