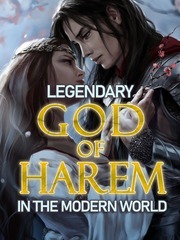 What is Legendary God Of Harem In The Modern World

Legendary God Of Harem In The Modern World is a popular web novel written by the author Lao_Ban69, covering HAREM, GOD OF HAREM, OVERPOWER, MODERN, COMEDY, MALE LEAD, NETORARE, ACTION, Magical Realism genres. It's viewed by 435.5K readers with an average rating of 3.21/5 and 25 reviews. The novel is being serialized to 101 chapters, new chapters will be published in Webnovel with all rights reserved.

Can a God truly die? Can a God be turned into a powerless mortal? Yes. Yes he can, just ask Ryan. For many years, the name ‘Nergal’ and ‘God of the Underworld’ was feared. All powerful and undefeated, Nergal terrorized and fought against all of his foes. Until one day, he was forced to retreat like a coward! In order to save his lieutenants and companions, Nergal must abandon his power, his status, and his godhood. So now he lives as the simple noodle seller named Ryan, unhappy and in a dead end life. But what if the Fates still have other plans for him? A goddess of a woman suddenly offered to be his queen. Queen!? Queen of noodles?! Has this woman gone insane!? What other explanation is there? Irina is a gorgeous, powerful, super rich CEO! She could have any man she wanted: from athletes, movie stars, celebrities! But she chose to marry a noodle seller instead!? Is this a problem that a God in the modern world has to deal with!? How the hell can Ryan live in peace with this mad woman throwing herself at him? Will the ghosts of his past as a God haunt him in the present day?