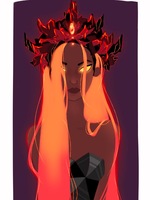 Legend of Shira: The goddess of the unknown

What is Legend of Shira: The goddess of the unknown

Legend of Shira: The goddess of the unknown is a popular web novel written by the author Didi_Mendes, covering ROMANCE, STRONG-FEMALE-LEAD, HANDSOME-MALE-LEAD, BEAUTIFUL-FEMALE-LEAD, FANTASY-ACTION, FACE SLAPPING, SCHEME AND CONSPIRACY, ALIEN CIVILIZATION, FANTASY-SCI FI, DANGEROUS-COUPLE, Sci-fi Romance genres. It's viewed by 3.7K readers with an average rating of 0/5 and 0 reviews. The novel is being serialized to 4 chapters, new chapters will be published in Webnovel with all rights reserved.

To the ancient creatures of the macrocosm Shira Faina Elisabeth Pendragon Lunar was an error in need of extermination. Her creation was abnormal and unforeseen even to the book of existence and the higher gods The power and magic she yielded was almost unmatchable and very contradicting which in turns makes it destructive Schemes and betrayal ensured during the quest of rectifying the "so called error" that brought forth the existence of Shira After 10 thousand years of hiding Shira finally decided to fight back destroying countless of universe in her awake and falling in love along the way for eternity ------------ Their stances were intimidating, while Shira just stand there, Sharbon and Serket together with the others started feeling the adrenaline pumping in their veins and they all smiled maliciously. Her smile was terrifying, the entire room turned cold before and within a blink of an eye she was standing in front of the high god of the rays. With her hands firmly on top of his head she  started squeezing forcefully, the man started scream loudly like a banshee and just like that his core essence was destroyed --------------- Beady eyes hidden within the bramble scanned the area, oblivious that they were prey to this Forest. A paranormal presence lurked in the essence of the devil's grasp, shadowing each living organism with dire precision. The female walking through this seemly never-ending forest, walked with a calculated and sinister purpose, her aura was imposing and intimidating. Hearth shattering battle cry can be heard throughout the surrounding vicinity. With holsters on her hips and both legs and holding a sword made from an elf bone with a red phoenix feather in between the tip of the sword. ------------ Note: this is an original novel written by me (Didi_Mendes) and not a translation (I don't own the cover, found it on Pinterest. All rights belongs to the creator.)