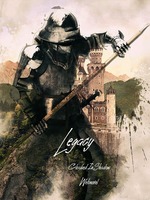 Legacy is a popular web novel written by the author Cloakedinshadow, covering FANTASY, ACTION, ADVENTURE, REINCARNATION, SWORDS-AND-MAGIC, Fantasy genres. It's viewed by 12.5K readers with an average rating of 0/5 and 2 reviews. The novel is being serialized to 14 chapters, new chapters will be published in Webnovel with all rights reserved.

Its a fact that everyone comes to die in the world of Phiadan. Everyone is concerned with how they're going to be remembered by, what impact they will have on the world. Aadam, an unfortunate soldier falls prey to the Cannimite Swarm of 1609 and reincarnates more than 200 years later. How will he adjust to the change in pace, what will he leave behind as his second legacy? So I did most of my summer assignments. However, I went through this again and I decided that what I wrote was pretty bad. So this is going on the hiatus shelf. I'll probably return to it later though, when I get a better picture on what I want this to be. ------------------------------------------------------------------- Chapters posted daily, except on Saturdays and Sundays by 8:00 A.M Eastern. Two chapters get posted on Mondays. Cover Image provided here: https://pixabay.com/illustrations/medieval-knight-armor-helmet-1753740/