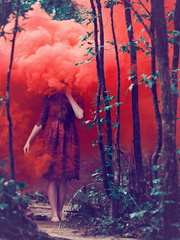 Even before her memories began, Lycora was locked in the depths of Aerseath, the haven of Children of Wind and the home to the first Source Well. With only her sister and her guardian for company, she grew up in isolation, waiting for the day the elders decided to kill her. She's a wingless angel with ancient symbols tattooed on her skin. An oddity stuck in a city that forbids her from friends, love, or existence because she never emerged, a dangerous liability for the people of the skies. However, the Metalians are on the move in on the city and the rebellion is on the brink of failure, the threat of death looming over all elementals. The last of the source is reaching out, whispering to the one who is forgotten. With the help of the powerful rebel Captain Cayde, and the mysterious Metalian General Demetri who's goals remain shrouded in mystery, the past will reveal what was lost and what could be renewed. With allies on both sides, the beginning of the end shall come. The woman shall emerge and with her, eternal fire. The world has a final choice, to redeem and start anew, or hold and burn in the rage of Her.