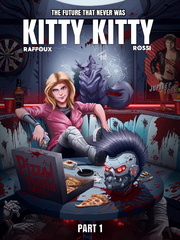 What is KITTY KITTY

KITTY KITTY is a popular web novel written by the author Quentin_Raffoux, covering R18, COMEDY, GORE, ACTIONADVENTURE, CYBERPUNK, SPACEOPERA, RETROFUTURISM, CASSETTEFUTURISM, SPACEWESTERN, Sci-fi genres. It's viewed by 1.2K readers . The novel is being serialized to 2 chapters, new chapters will be published in Webnovel with all rights reserved.

"KITTY KITTY - The future that never was" is an action driven adult science-fiction action-driven book series borrowing from different sub-genres such as space opera, space western, cassette futurism and cyberpunk. KITTY KITTY has a unique and deeply retro universe. Because, in this uchronia, the Soviets planted the Red Flag on the Moon in 1949. Since then, mankind has relentlessly pushed its colonies to the ends of the solar system. It devotes all its scientific and industrial resources to it. This means that, during the events of "KITTY KITTY - The future that never was", its cultural codes seem frozen in some alternative 1980s. Floppy disks are kings and David Hasselhoff is the ultimate galactic superstar; Robots do all the work and the packs of cigarettes are cheaper than ever! Yet, life is hard. As humanity is expanding trough the Kuiper Belt and the New Worlds, the overly consumerist society is slowly collapsing because of the never-ending corpo-wars and the blatant technocratic corruption. In this merciless cosmos survives Lee, the space Maine Coon, despite his ready tongue and his sassy feline comments giving him nothing but troubles. Fortunately, he goes along with "his" sapiens and partner : Ali, a violent and cheeky young woman who only swears by her Desert Eagle .50 and her oversized soda cups. Aboard their mythical ship, the Kitty, this duo of bounty hunters travels trough the faithless and lawless void, staging a succession of disasters and Betamax binge watching. So… what are you waiting for? Dive into this strange future of punks cyborgs and flying shiny Chryslers! Bloody, irreverent but always hilarious, "KITTY KITTY - The future that was never was" will allow you no respite. Take a deep breath, and BACK TO BUSINESS! Visit my website for more info: raffouxrossi.com or follow me on Instagram!