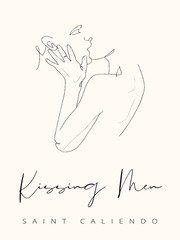 What is Kissing Men

Kissing Men is a popular web novel written by the author Saintc, covering BOYXBOY, GAY, MANXMAN, LGBT, HOMOSEXUAL, SMUT, ROMANCE, SLASH, MALEXMALE, LGBT+ genres. It's viewed by 317.7K readers with an average rating of 0/5 and 8 reviews. The novel is being serialized to 61 chapters, new chapters will be published in Webnovel with all rights reserved.

A collection of Ten Gay Romance Novels. Volume One: Like Sugar. Jared Abitol is ugly, past his prime and desperate for love. But when you look like Jared love isn't easy to find. Jared might not have the looks, but he has the money, so giving up on love and settling for the next best thing is all he can do. With the help of a colleague, Jared Abitbol reaches an agreement with Darnell Miller. Jared pays his college fees and rent, while Darnell puts up with shitty sex with an older man. Sounds simple enough, doesn't it? It's not. Volume Two: May-December After filing his company for bankruptcy, Kyle's wife leaves him and his three-year-old son. Now a forty-two-year-old divorcee with no parenting skills or money, Kyle decides to move back to the small home town he grew up in. He should have lost all hope in love and romance, but there's something about Chaska, his son's preschool teacher, that just makes him feel like a college student in love again. Volume Three: Why I Love Him Johnathan has always been helplessly in love with Wayne. Wayne, the top of his college's engineering class. Wayne, the student council president. Wayne, the best graduating student in their class. Wayne and Johnathan used to have something, something Johnathan thought was a relationship, but when Wayne cuts all contact with him after they graduate, and Johnathan starts hearing rumors about Wayne getting married, he realizes that wasn't the case. Fast forward to the future were Wayne is asking for a second chance. Johnathan wants to hate him with every fiber of his body, but he can't just understand why in the world he was still in love with him. Upcoming Volumes: - Why I Love Him - Learning to Love - Acceptance. - My Type Of Socializing - Kissing Wounds - Aristocrat