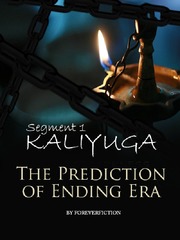 What is Kaliyuga Segment 1 : The Prediction of Ending Era (BL)

Kaliyuga Segment 1 : The Prediction of Ending Era (BL) is a popular web novel written by the author forever_fiction, covering BL, ROMANCE, GODS AND DEMONS, FANTASY, DRAMA, LGBG, LGBT+ genres. It's viewed by 12K readers with an average rating of 0/5 and 1 reviews. The novel is being serialized to 8 chapters, new chapters will be published in Webnovel with all rights reserved.

[ON HOLD] Wrongly accused of murdering his own kind, Ruan, the servant of the God, is exiled from his service to atone for his sins, his powers are snatched away and he is cursed to live as a human in the mortal world until he could learn from his mistakes. Ruan thought he would be forgotten, but he never took in to consideration the meek little boy he left behind. The same boy, Yeonja, who is not meek and little anymore, the same boy, whose name is now spoken with fear and reverence, the same boy who landed injured in Ruan's lawn, bleeding and half unconscious. "This novel is Part 'I' of the series"