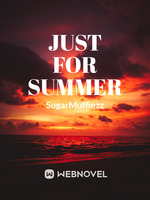 What is Just For Summer

Just For Summer is a popular web novel written by the author SugarMuffinzz, covering ROMANCE, TEEN, HUMOR, HIGH-SCHOOL, FRIEND, FOOTBALL, Teen genres. It's viewed by 2.4K readers with an average rating of 0/5 and 0 reviews. The novel is being serialized to 8 chapters, new chapters will be published in Webnovel with all rights reserved.

Lexi Parker decided to spend her summer before senior year in Florida to make friends, have fun time, and grow from her toxic past. Jason Watts is trying to get through the summer while hiding something that could destroy his reputation and future as a football player The more they hangout, the closer Lexi and Jason become, but their pasts and secrets are proving to cause more problems than they thought. One summer, two teens, and two messy pasts. No big deal, right?