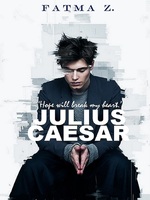 What is Julius Caesar

Julius Caesar is a popular web novel written by the author teaddict, covering BROMANCE, ROMANCE, ACTION, LOVE, BAD BOY, YOUNGADULT, NEWADULT, MENTALHEALTH, PLOTTWISTS, CRIME, Horror&Thriller genres. It's viewed by 270.9K readers with an average rating of 0/5 and 6 reviews. The novel is over and can be read all 67 chapters in Webnovel with all rights reserved.

Julius Caesar works with his father for his dead mother's company, Gorj. He is a murderer because his father taught him that it was 'okay' to kill for Gorj. Some documents get stolen from them by a very famous lawyer, Ricardo. Instead of getting the documents, Julius kills him accidentally, and his father gets really angry because the documents hid a very important secret. Julius is forced to find Ricardo's daughter when his father harms him in the cruellest way possible. On the journey, in London, for revenge against his father, he'll meet a lot of people who'll develop his personality. He finds himself getting caught up in a lot of twists and turns. And drama- something he absolutely detests. It's a fun, heartbreaking and rough ride that'll give Julius a taste of humanity. And a broken heart for sure. *** All rights reserved Find my book on Wattpad via https://my.w.tt/qaXL8YTDmR

My boss is my ex-lover (completed)