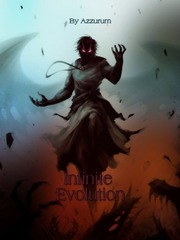 What is Infinite Evolution

Infinite Evolution is a popular web novel written by the author Azzurum, covering EVOLUTION, LEVEL UP, SYSTEM, GODS, MAGIC, REVENGE, Fantasy genres. It's viewed by 416.8K readers with an average rating of 4.71/5 and 20 reviews. The novel is being serialized to 16 chapters, new chapters will be published in Webnovel with all rights reserved.

Noah Solomon was born as an orphan and was proclaimed as a genius since he was a kid. He grew up to be the the strongest human. He was known in many names [Hero], [Sage], [Grim Reaper]. Suddenly a crisis fall into his kingdom. The embodiment of fear, the dragon attack them but not just any dragon but the strongest dragon. When Noah finally killed dragon something unbelievable happened he was betrayed by his best friend because of his jealousy and greed. He killed him in coldblooded, but before he died he acquired new skills when he killed the dragon then he heard the system. [Congratulations! You killed Nylbiarynth the King of Dragons!] There were 15 glowing orbs [Please choose 4 skills] [Skill Learned!] [Skill Learned!] [Skill Learned!] [Skill Learned!] [You have died!] [Using passive skill {Reborn}] (The cover is not mine, if the creator is out there message me if you want me to take it down. This is your usual overpowered mc! Though he will be weak asf in the future chapter... So if you don't like those kinds of stories don't read it. It will definitely bore you. This is just a story that I came up with while daydreaming that I decided to post here for fun.)