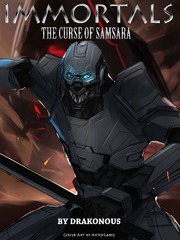 Immortals: The Curse of Samsara

What is Immortals: The Curse of Samsara

Immortals: The Curse of Samsara is a popular web novel written by the author Drakonous, covering R-18, HAREM, REINCARNATION, MATURE, ACTION, MARTIAL ARTS, MAGIC, URBAN FANTASY, FUTURISTIC SETTING, SCI-FI ACTION, Magical Realism genres. It's viewed by 631.8K readers with an average rating of 4.78/5 and 36 reviews. The novel is being serialized to 228 chapters, new chapters will be published in Webnovel with all rights reserved.

"You have all the power in the world. The money, the strength, the charm. But what does it matter, when you are fated to a life of eternal misery? To repeatedly live a loveless life? Wherein everyone - and everything - you love dies and fades away with time?" For as long as Jason can remember, he has been a killer. Raised as a child soldier, he was trained in the arts of murder as a mercenary, an assassin, and a bodyguard. In short, his life was anything but dull. Yet his greatest wish was to live a normal life, date a normal girl, have a moment to breathe and relax. His wish was to be a normal boy, no, a real boy and not some weapon. But his thirst for strength led him to the path of both the scientifically psychic world and the mystically supernatural world. One day, he is entrusted to protect a young girl whose entire family was murdered. Two years after taking her as his sister, Jason tries to lead a life that's as normal as possible in the most technologically advanced city in the world, Sanctuary. However his newfound freedom is threatened when his past comes to haunt him, and his hunger to join the extraordinary life once more begins to consume him. As enemies from both the worlds of supernatural and science come crashing down upon him, Jason must make a choice, and choose which life he'd rather have. An uneventful, normal life. Or the life of the impossible, where dog eats dog, and only the strongest survive. "There are no good people or bad people. No heroes, no villains. Just people. People doing what they believe is right. From their perspective. Their experience. Their upbringing. Their nature. Their nurture. But there are monsters out there ... monsters who just want to watch the world burn. Wanna guess which one I am?" Cover art commissioned by me and made by ArtofLariz from DeviantArt. Warning: This is an 18+ novel with detailed violence and mature scenes. Spoiler-not-a-spoiler: The story will eventually leave the urban fantasy setting and head into high fantasy. Because of this, supporting characters may be written out as the story progresses forward, so please don't get too attached. (Possible side-effects to attachment may include crying in public and blaming ninjas, swearing out loud in a bus, smashing your pc's keyboard, or chucking your phone at the wall and almost hitting your mom. Readers discretion is advised)