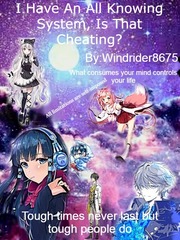 I Have An All Knowing System, Is That Cheating?

What is I Have An All Knowing System, Is That Cheating?

I Have An All Knowing System, Is That Cheating? is a popular web novel written by the author Windreader8675, covering FEMALE LEAD, SYSTEM, OP MAIN CHARACTER, MAGICAL ABILITIES, OVERPOWERED FEMALE LEAD, ALL-GENRE MIX, DISCIPLES, WANNABE LAZY MC, LAZYISH AUTHOR, Fantasy Romance genres. It's viewed by 96.6K readers with an average rating of 4.88/5 and 13 reviews. The novel is being serialized to 30 chapters, new chapters will be published in Webnovel with all rights reserved.

Xun Ying died by a gunshot that hit her on the head by a terrorist. Her soul was saved by a system that apparently called himself Baobao and brought her to Eververse, a world where children are possible no matter your gender and relationship status. As the daughter of Lan Tianqing and Tian Siyang, everyone expected her to be just like them, becoming a powerful figure, however, what will happen if the situation exceed what people expect of her and become a genius who knows how to read and write at 2 and walk and run at 8 months old while talking only when 3 months old? In this life, Xun Ying's only goal is to protect her family and live her life to the fullest. But what happens when she got a disciple out of nowhere and somehow end up with a whole city population of disciples following her? Besides her goal, the only thing else that she wanted to be was a salted fish! Now, what should she do to her disciples? And that man who kept pestering her? __________ *Credits to the creator(s) who created the anime characters Status: Cover Completed Author:*phew* Spend so many hours working on it.

The Making of the Vampire Queen

A Highest Rank in Another World!