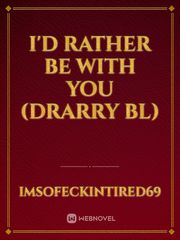 I'd rather be with you (Drarry Bl)

What is I'd rather be with you (Drarry Bl)

I'd rather be with you (Drarry Bl) is a popular web novel written by the author ImSoFeckinTired69, covering DRARRY, HOMOSEXUAL, HARRY POTTER, HOMOPHOBIA, DRACOMALFOY, MAYBE R-18?, VEELAXHUMAN, GAYBOYSLOVEHOMOROMANCES, Fantasy genres. It's viewed by 1.6K readers with an average rating of 0/5 and 0 reviews. The novel is being serialized to 1 chapters, new chapters will be published in Webnovel with all rights reserved.

☡☡ WARNING!! This is a DrArRy BoOk guys!!! Dont like, DONT READ! I dont like people who discriminate or says mean things about something. If you dont have something nice to say, dont say anything at all!! Also, this story will have swearing in it so if your not comfotable with any of this, please do not read it ☡☡ Harry Potter X Draco Malfoy ❤ BOYxBOY DRARRY STORY!! Harry - Vella Draco - Ferret Exclamer: I do not own ANY of the characters in this story! I only own the plot! Also Credits for the characters obviously go to J.k.Rowling ❤❤❤ PLOT: Harry is on his way back to hogwarts. As he was on the train to get there, he fell asleep. In his dream, he sees a lot of images flash before his eyes. The shocking thing, was they were all of Harry and Draco malfoy. When Harry wakes up, he gets into his robes and exits the train. He then finds Cedric bullying malfoy, and for some reason he gets angry.... no PISSED How does draco react when he finds out that he is harry's mate. Will he reject draco? what will happen? To find out, READ THIS BOOK!!! :)