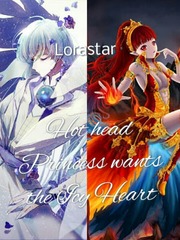 This is the story of Lavina and Nepthal, who are just opposite of each other in everything whether its temperament or character. They both were born together at the same time and in the same palace. Their fathers were childhood friends, so they were. Their chemistry since the day they were born was just like they were meant for each other or i will say, They were made for each other. But, happiness do gets evil eyes very fast. Who would have thought that their lives will be turned into a mess by Gods, just for fulfilling their desires for gaining higher status. They became chess pieces of a fight they never belonged to, which lead them to completely forget everything about everyone. Even about each other. Resulting in the destruction of Friendship of two friends, two kings, two kingdoms. Their childhood engagement was cancelled. Their upbringing were done in different places,in different environment . Nepthal became the Crown Prince of Pierre kingdom , He got the powers of water and ice. Whereas, Lavina was crowned as the Crown princess of Dollmaire, she got the power of fire One was Cold and calm other was fierce and full of wrath. One was a low-key other was know as the war beast with a dream of concuring the whole world, and the other was staying isolated from the whole world. What will happen if both of them met again? What kind of reunion will they get? Will they be together? ............OR a great dangerous fate is awaiting for them....... lets get to know this together. [Hi, guys its Lora (author) here. This is my first work, after a lots of hesitation i decided to start updating. This is a totally different story you may have ever read. Pls give it a go, and give your valuable opinion. ....... ..... pardon me for my poor grammar..... my English is not that much good....so pls ignore that...And Pls support (人 •͈ᴗ•͈)╰(＾3＾)╯] Insta ID..=. lorastar_wn