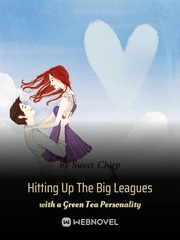 Hitting Up The Big Leagues with a Green Tea Personality

Hitting Up The Big Leagues with a Green Tea Personality is a popular web novel written by the author Sweet Chirp, covering Contemporary Romance genres. It's viewed by 226.1K readers with an average rating of 4.65/5 and 38 reviews. The novel is being serialized to 40 chapters, new chapters will be published in Webnovel with all rights reserved.

Xia Bohe, a D-class actress struggling to make it big, wakes up to find herself transmigrated as a supporting character in a novel she's been reading. In this novel, the main character married a successful, wealthy and sexy CEO only to end up divorced with a ruined career and ultimately losing her life. With a second chance in life, Xia Bohe is not about to give up easily. But wait, what is this Goddess System with its beauty and acting skills? This can make things very interesting and fun as Xia Bohe navigates her way to success in her career and love life while getting rid of other pretentious cups of green tea in her path!

I, The Female Protagonist With Superpower, Am Super Fierce