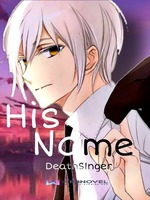 What is His name

His name is a popular web novel written by the author Deaths1nger, covering ACTION, FANTASY, EVIL-PROTAGONIST, ANTI-HERO MC, EMOTIONLESS-MC, Fantasy genres. It's viewed by 656 readers with an average rating of 0/5 and 0 reviews. The novel is being serialized to 2 chapters, new chapters will be published in Webnovel with all rights reserved.

[December 26, 9:46pm] A young silver haired boy found himself laying on a thick layer of snow in the middle of the forest. Snowflakes kept falling down from the sky and some gently landed on his white, tender skin. A couple of ice spikes suddenly fell from a tree and nearly landed on him but strangely, the ice spikes broke into pieces and didn't land on his skin. This young boy opened his eyes and revealed his golden, amber eyes which looked extremely attractive but for unknown reason, his eyes were cold and it didn't reveal a single emotion other than emptiness. He stared at the dark sky.. It was cold but he didn't feel anything which is odd. He's only wearing a white shirt.. a white shirt that is almost covered with blood, black pants and long brown boots. 'How did I end up in this place?' 'Where am I?' '...' 'Who..' 'Who am I?' Questions started filling up is mind but he didn't move from his spot. He stayed there until the sun slowly rose. A pack of hungry wolves was nearby and followed the scent of fresh blood... the blood on his clothes. These wolves were out searching for their food last night but due to the weather and extreme cold, they couldn't find any. But when the sun rose and snowflakes finally stopped from falling, they were able to trace the scent of blood. And it led them to where the young boy is. When they saw the boy laying down on the snow immobile like it was some kind of comy bed, they didn't hesitate and took the chance to pounce on him.. But they immediately wished they didn't do that.. Just a second have passed after they decided to pounce on him, but their heads were already cut off by an unknown force! It was so fast that none of them felt or even heard anything. 'So noisy' The boy was woken up by the wolves but not a single hint of irritation can be seen on his face. This time, he finally decided to stand up and move away. His height is about 6'2 and his whole figure is almost perfect. 'What am I gonna do?' He asked himself Ever since he found himself in this dense forest, he just kept thinking why is he there? It's winter so he should be in his home with his family right? He kept asking himself but he got no answer.. He tried remembering but it didn't work. Why can't he remember a single thing? Who is he? or rather, what is he?