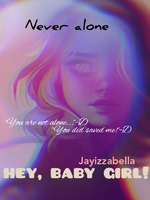 What is hey, baby girl!

hey, baby girl! is a popular web novel written by the author jayizzabella, covering LOST AND FOUND, ABUSED ABANDONED, BRUTAL SADISTIC, COMEDY TEASING, LOVES HATES, FORGIVE AND FORGET, INSECURITIES SELF-ESTEEM, REVENGE VIOLENCE, Realistic Fiction genres. It's viewed by 57.3K readers with an average rating of 0/5 and 1 reviews. The novel is being serialized to 50 chapters, new chapters will be published in Webnovel with all rights reserved.

She has got plenty of summon 'love' letters whenever she was finishing her shipments delivery. All the love letters including her traffic errors by the speed driving, dangerously driving, the red light, and so on. Not to mention about the truck condition when she was having her hand on the 'wheel'; severed scratches, slightly dented almost making her boss losing his mind about her recklessness. But, nevertheless she was the only female that always done with the job perfectly. How did she managed it all along her reckless driving? No idea... She was a bit crazy and huge fan of sillyness. Be friends with Romeo and Danny did makes her even more silly about everything. Talha, he never stopped hitting on her... The triplets really annoying her to the core! Their life style really suffocating her especially they happily making her their private maid. The Hibiscus, their mother never like her or she loathe her very damn much and can't wait to let her vanish forever. Then, came a guy keep on disturbing her whenever he likes and at the same time, her memories that she kept hidden slowly resurfaces when another man approaching her to gain her interest. He wants to bring her home after he saw her for the first time! "That is my life. I will live with her not you so I know what I'm doing. Stop pestering me about suitable or not she is to me because look at yourself...*scoff* you are still alone...oops...a divorcee...hope you got it! Now move!" Oh my...just because of Didie, I'm talking this much? I thought I think to much...weird! There were someone who doesn't want to be discovered but something happened and she...came out from her true 'hiding'... Diddy Aulia (Didie Owl-lia)- the silly girl. Daniel Zackery @ Z- the biggest scoundrel. The Master @ Jace Damon- her previous master. Hibiscus- the lady who always desperate! The triplets- Orchid, Poppy and Lily; whatever! The friends- Romeo, Danny and Talha; very rarest human being. 'She'- claiming what was belong to her. Full of secret! Did she? "..." Little did she know, the baby girl guy came into her life after a year of her previous 'love' events. With simple text of messages, at first she's just ignored it but it turn out to be something serious from time to time. "Hey, baby girl!" "I miss you baby girl and hope to see you again!" Her life became a mess because of her own imaginary love, the unexpected swarming of the crowdness at the same time...they all required something that belong to her... Her self either to be love, to be hate, to be died or to be kept... Everything turn upside down and she was once again experiencing her previous life fully...another dark episode clouding above her life waiting for the thunderstorms of trouble to resurface once again leaving her wet dangerously of her misery that she had to endured. "I just wanted to be in a simple relationship with a simple man. Love could combine us all but looks like...love have to fight much stronger than the other..."- Didie Aulia. So hard to be amongst the lovely feeling calls LOVE... ******** you can support me at: https://ko-fi.com/jayizzabella Inquiry or QnA session send me those messages through: jayizzabella88@gmail.com Enjoy! Love- jayizzabella ❤️❤️❤️

Back in Time: Through time and Space, Love Persist