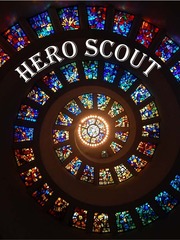 What is Hero Scout

Hero Scout is a popular web novel written by the author Willsimulated, covering SYSTEM, REINCARNATION, MAGIC, ADVENTURE, COMEDY, FANTASY, GAME, MALE-PROTAGONIST, ACTION, Fantasy genres. It's viewed by 324.3K readers with an average rating of 4.88/5 and 39 reviews. The novel is being serialized to 125 chapters, new chapters will be published in Webnovel with all rights reserved.

Kenji the quick-witted gamer is sent to a fantasy world and quickly finds himself embroiled in various plots, schemes and difficult situations. Attaining the gift of being born as a Forbidden Mimic, he can replicate the bodies, powers, memories and spells of others. Yet there are 17 other evil souls given powerful starting abilities, and the denizens of his new world are no joke either!