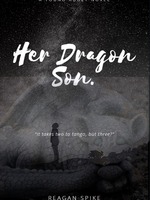 What is Her Dragon Son

Her Dragon Son is a popular web novel written by the author Reagan_Spike, covering ROMANCE, MAGIC, LOVE, WEREWOLF, DRAGON, PARANORMAL, BABYBOY, BABY DADDY, Fantasy Romance genres. It's viewed by 861 readers with an average rating of 0/5 and 0 reviews. The novel is being serialized to 3 chapters, new chapters will be published in Webnovel with all rights reserved.

Lara had been living a monotonous life, where nothing exciting ever happens to her. No friends, no lover, although, she understood that she'd never find 'the one' if she's locked up in her room all day long, he would never come knocking on her door and she knew it. Would he? She'd become so tired of life but everything changed when she found a new-born boy in a trashcan along with weird shells and takes him to a hospital where she adopts him. She thought the only weird thing about him was his usual body temperature until he turned into a dragon and bit her. In his quest to find a mate, Gramar, The Calm became Gramar, The Miserable. And it all occurred when the mother of his heir vanished with his son. Although his son was reported dead, he could feel in his heart that it wasn't true. And until he finds a body, he will not cease searching for his son. Gramar's experience has made him give up on finding a mate. But why is his dragon restless whenever she's near?