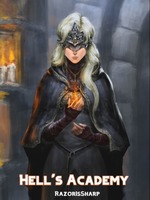 What is Hell's Academy

Hell's Academy is a popular web novel written by the author RazorIsSharp, covering HAREM, ROMANCE, ADVENTURE, REINCARNATION, UNIQUE-ABILITIES, WEAK TO STRONG, ACTION, KINGDOM-BUILDING, KINGDOM, STRATEGY, Fantasy genres. It's viewed by 474.1K readers with an average rating of 4.79/5 and 21 reviews. The novel is being serialized to 161 chapters, new chapters will be published in Webnovel with all rights reserved.

Howard awoke every morning with the taste of blood in his mouth. Every night before he went to sleep, the women sleeping next to him shot him to death so that he could reincarnate in the morning. They did experiments on him, all because he had horns on the top of his head. Finally, after years of experiments, they tossed him into the abyss. A place worse than hell called the Furnace. Down beneath the surface, the Furnace allows dreams to turn into reality, abilities to be amplified by a thousand fold, and for conquests to unfold. Howard, finally finding himself free in the Furnace, joins a team of reprobates from Hell's Academy, hoping to conquer the Furnace and build the ultimate kingdom in the darkest trenches of the world.

From Slave to Ruler