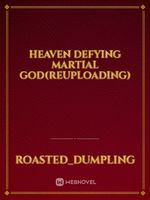 What is Heaven Defying Martial God

Heaven Defying Martial God is a popular web novel written by the author Roasted_Dumpling, covering ACTION, ADVENTURE, COMEDY, CULTIVATION, TRAGEDY, WEAK-TO-STRONG, BEAUTIFUL FEMALE LEAD, BODY TEMPERING, HIDING TRUE ABILITIES, ARTIFACTS, Eastern Fantasy genres. It's viewed by 5.4K readers with an average rating of 0/5 and 1 reviews. The novel is being serialized to 4 chapters, new chapters will be published in Webnovel with all rights reserved.

“In the name of Sovereign Yu, the one that saves me from my desperate moments, I vow in my name, Lu Fan, not to disappoint; take revenge you!” Lu Fan a legendary genius of Sword Martial Sect, lost his value, exiled from the sect— by his Foster Father, the sect leader. Leaving the sect, he unexpectedly witnessed a great battle between two powerful cultivators. One died while the latter seriously injured. The seriously injured cultivator chooses Lu Fan as his successor, disciple that would inherit his legacy. With nothing holding him back anymore, Lu Fan would soar, show those who treat him with coldness as he stood atop the highest world.