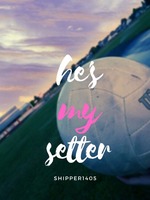 What is He's My Setter

He's My Setter is a popular web novel written by the author Celestial_Harune, covering ROMANCE, COMEDY, VOLLEYBALL, Teen genres. It's viewed by 1.7K readers with an average rating of 0/5 and 0 reviews. The novel is being serialized to 5 chapters, new chapters will be published in Webnovel with all rights reserved.

Sirean Moon, a kind, loyal, person who knows how to handle leadership, a happy-go-lucky girl and more. She is also known as the Queen of the Court but that name of hers is put up for a good reason. She was born with a natural talent for volleyball and because of this talent she was able to meet someone that might match her While on the other hand, we Evan Miles, a King who was described as a self-centered, a bossy and a perfectionist player. He was called the King of the Court by his former teammates due to his lack of sportsmanship but little did he know, he might find someone that might be a good match for him After a practice match between Midnight University and Valentine University, Evan quickly fell in love with Queen, who wouldn't? But little did he know the Queen herself fell in love with the King of Valentine's volleyball club. But can the Queen's queenly attitude and the King's not so kingly attitude make the cut to become partners in love? Will it work out? Or will it be useless for the of both of them.