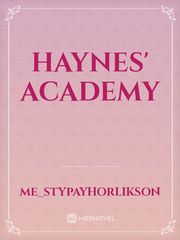 What is Haynes' Academy

Haynes' Academy is a popular web novel written by the author Me_StyPayHorLikSon, covering BILLIONAIRE, MYSTERY, SCHOOL, ACADEMY, RICH, HEIR, HEIRESS, COMPANY, POOR, PRESTIGIOUS, Realistic Fiction genres. It's viewed by 7.8K readers with an average rating of 0/5 and 0 reviews. The novel is being serialized to 6 chapters, new chapters will be published in Webnovel with all rights reserved.

Haynes' Academy stands as the most coveted prestigious school there is, created in 1995 up to present, it still stands as the number one private school in the entire world. A school where the heirs, the heiresses, the honorable, and the honored attend. Which means only three things. Business and Money. Government and Money. And non-money. *** Haynes' Academy is a widely known, extremely aristocratic and highly sophisticated school. Haynes' Academy for the Heirs, Heiresses, Honorable, and Honored. A school for the arrogant the intolerable the insufferable and the privileged A school where sons and daughters of the highest classes from different parts of the globe are enrolled to study. Heirs and Heiresses of businesses alike, Sons and Daughters of respected government officials. A school where the highest of high are seen, where the most known of the famous are spotted, where the rotting of the spoiled are found. Rich, polished, money-wasting, fancy and pampered high class bratts. Then, there are the Honored. Students who were able to enter because of their genius brains or students who are only able to attend the school because of their connections and relations to the "Moneys". And the Moneys. A slang for those who are overflowing with, well... Money. Not just any money. Millions per second type of money. Haynes' Ac. is a prestigious school, and aside from it being the sanctuary of walking money notes, it's also known for its strict and unbendable rules, unless of course you have money that is. One of its many rules, is that a student cannot enroll unless they'd be starting fresh on a level, and once you leave, you can't come back until the next level starts. Unless, again, you got money. The only times a student is able to enter is either through: 1) Kindergarten 2) 1st Grade 3) 7th Grade 4) 10th Grade 5) Post-highschool 6) Freshman That is, as I've said, unless you have connections to the Moneys. To sum it all up, Haynes' Academy is only limited and exclusive to either Money or Brains. Two completely different things.