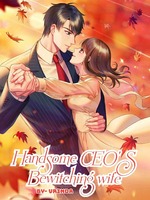 What is Handsome CEO'S Bewitching wife

Handsome CEO'S Bewitching wife is a popular web novel written by the author Vrinda13, covering ROMANCE, SHOWBIZ, STRONGFEMALELEAD, MOVIES, REVENGE, BILLIONAIRE, CUTE, FEMALEPROTAGONIST, STRONGMALELEAD, HIDDENMARRIAGE, Romance genres. It's viewed by 8.7M readers with an average rating of 4.63/5 and 1079 reviews. The novel is over and can be read all 425 chapters in Webnovel with all rights reserved.

"These are my conditions. You have to agree upon them before we can get married." "Accepted. Each one of them is accepted. Any more conditions, soon to be wife?" "Yes, I want your help to destroy my jerk of an ex-boyfriend." A sly smile appeared on the lips of the men sitting opposite her. "With pleasure." How could he let his competitor stay unharmed? He would be having his own fun in destroying the man who had made him taste vinegar a lots of times. "Something as?" Before she could even shake her head, he stood up from his seat and held her hand. "Let's go." "Where are we going?" "Civil affairs bureau. Any time later and it will be closed." Xin Mei looked at the man with wide eyes, and before she could comprehend, she was sitting in civil affairs bureau with a marriage license in her hand. **** Xin Mei woke up from coma after 3 weeks of long sleep. She faced a brutal reality like every other female lead; her boyfriend was cheating on her with her best friend. Feeling vengeful, she decided to have her revenge. It's payback time. "She snatched my boyfriend; I will snatch her career from her." "He rejected me. No problem. I will find a more handsome man than him." "His father made my father beg; now I will make him beg." And who will help her? Su Yuchen! Su Yuchen believed that a person can fall in love only once and he had already fallen in it. His belief was broken badly when he met Xin Mei. After tasting a lot of vinegar, he could not wait for another second to make her his wife. He could not lose his second inning in love. ****** Story Discord Link: https://discord.gg/4bKHKmS Note: This is an original story by me. The cover is edited by me but I don't own the picture. Credit to the owner. Update schedule: 2 chapters daily 14 Chapters in a week Current editor and proofreader: Harry_7, StormAthena5, TannyChan

The Devil CEO and Fairy Teacher

Then comes spring when winter ends