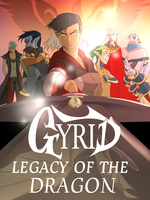 GYRID: Anarchy in the Dragon's Shadow

What is GYRID: Anarchy in the Dragon's Shadow

GYRID: Anarchy in the Dragon's Shadow is a popular web novel written by the author 46Kibahime, covering ACTION, MAGIC, NO SYSTEM, POLITICAL, SHAPESHIFTER, MULTIPLE LEAD CHARACTERS, Fantasy genres. It's viewed by 11.1K readers with an average rating of 0/5 and 2 reviews. The novel is being serialized to 34 chapters, new chapters will be published in Webnovel with all rights reserved.

Esconia and Steyn have always worked to defend their homeworld, working to keep the ecological balance that sustains their fragile, multi-species society. When a history-altering event throws the world they know into the turmoil of anarchy, they need to face dangers both wild and urban in their search for sanctuary. To protect their son and their lives in the wake of civil upheaval, they are determined to survive... And fight back. ♢✧♢ Planet Ambon. A world of magical creatures, dinosaurs, and alien monsters supposedly native to this terrestrial ball, fuelled by mana flowing like liquid from the planet's Orihalcum core. This is a world plagued by war until fairly recently, but all peace is a farce. The Sentinel Dragons that reign supreme are not necessarily seen as benevolent, despite their appearance bringing a period of great tragedy to an end. Dissidence has been brewing for an untold age, and finally, the pressure that has been building beneath society's fragile surface has cracked. Without a Sentinel to lead, the continent enters a dark era... +=+=+=+=+ Prejudices and political views expressed in this work of fiction may not represent the ideals of the author. Any resemblance to any persons, real or fictional, is strictly coincidental. Originally an English publication. Cover art by me. Adapted from the original script of the webtoon, "GYRID", drawn by myself. Mixed-gender lead from multiple perspectives. Starts primarily with the leading lady's POV, but progressively gains more screentime between the leading man and several other cast members' perspectives. Mainly tagged as male-leading because the platform slaps 'romance' on anything with a female lead, and this is FAR from a romance novel. There are numerous sentient species in this work. The terms 'human' and 'person' are not the same thing, as should be taken into careful consideration by non-first language English readers. +=+=+=+=+ Author's Instagram: https://instagram.com/46Kibahime Discord Under Construction!