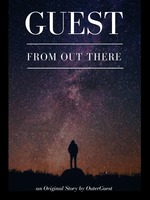 Guest From Out There

What is Guest From Out There

Guest From Out There is a popular web novel written by the author OuterGuest, covering APOCALYPTIC, SCI-FI, APOCALYPSE, SURVIVAL, ALIENS, ALIEN, INVASION, ALIEN INVASION, Sci-fi genres. It's viewed by 54.8K readers with an average rating of 0/5 and 3 reviews. The novel is being serialized to 103 chapters, new chapters will be published in Webnovel with all rights reserved.

The year was 2032, and 21-years-old Ensign Travis Burners of the U.S. Navy received the order to transfer his stations to Chicago Military Academy Base after he had just received an award for his recent services. For him, it would be just like going back to his birth town and home town. But he would never expect to witness the complete chaos there as unknown creatures from the sky suddenly invaded in the middle of his first night in Chicago. Before he realized it, the situation of his home town had turned into what could be described as an apocalypse. As he ventured himself deeper into what was left in the city, he became more and more uncertain if he could survive the ordeal, even together with 1st Lieutenant Jonathan Xavier of the U.S. Air Force and the newly-joined U.S. Army cadet Ryan Ming. Did they make it? Did they eventually escape the city, retaliate the invaders, or rather succumb to the ordeal?