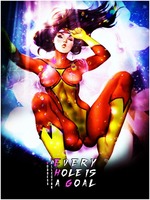 Goddess Collector: Every Hole is a Goal

What is Goddess Collector: Every Hole is a Goal

Goddess Collector: Every Hole is a Goal is a popular fanfic written by the author FanHarem, covering HAREM, ANIME, MULTIVERSE, TRANSMIGRATION, GAMES, RAPE, INCUBUS, FLUFF, COMICS, CARTOONS, Anime & Comics genres. It's viewed by 9.3M readers with an average rating of 4.6/5 and 222 reviews. The novel is being serialized to 636 chapters, new chapters will be published in Webnovel with all rights reserved.

Current World: Marvel Credits to Allchemic for such a wonderful cover. Love you mate. *** Nik Faran, a son of the miserable harlot that lead a life of a miserable gigolo. His birth father is one of the top swordsmen that gave his mother the glory of entering his chamber now remained unknown. Passing years allowed Nik to polish his skills as a prostitute before he was suddenly made aware of the rumour that was the mythical Incubus Society. It was at that moment that his life finally changed. *** Links: If you wish to support me, then be sure to check out my patron. Patron: http://bit.ly/2mE8O4b Discord: https://discord.gg/egdFUe5 @ Fanharem#1354 Warning:The novel is based for my ambition to make the biggest fictional harem. Therefore, lemon scenes are the focus. This novel also contain minor degradation and few r*pe scenes. Proceed with caution.

Sinful life with the strongest system

Reincarnated as a dragon egg in DxD with a Fate System!