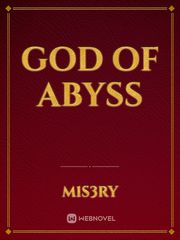 What is God of Abyss

God of Abyss is a popular web novel written by the author M1s3ry, covering MODERN, RUTHLESS PROTAGONIST, CUNNING PROTAGONIST, LOYAL SUBORDINATES, ORGANIZATION BUILDING, Fantasy genres. It's viewed by 344 readers with an average rating of 0/5 and 0 reviews. The novel is being serialized to 1 chapters, new chapters will be published in Webnovel with all rights reserved.

After trillions of years, the Universe will eventually die and a calamity called Universe's Extinction will arrive, and neither Gods nor Demons can escape. After all the creatures will die under the calamity, the Universe will be destroyed, and 1 trillion later a new Universe will be formed, and the first gods will be born together with the Universe and also each god started to create their own race. Billions of years passed by, the War of Gods started, and a lot of Gods fell and it was at that time the end of the Era of Gods. Due to the War of Gods, a lot of holy realms were destroyed and only a few remains that can be counted in fingers. Even the peak techniques were destroyed. The world of cultivation was heavily affected and even started to fall as well until it gradually becomes a legend in history. However, what if a god that should have been killed from the extinction revived in the current era?