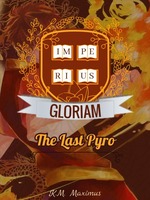 What is Gloriam: The Last Pyro

Gloriam: The Last Pyro is a popular web novel written by the author KM_Maximus, covering SYSTEM, TOARU KAGAKU NO ACCELERATOR, ACTION, ADVENTURE, POWERS, AVATAR: THE LAST AIRBENDER, PYROKINESIS, PYROKENESIS, Martial Arts genres. It's viewed by 7.1K readers with an average rating of 0/5 and 2 reviews. The novel is being serialized to 14 chapters, new chapters will be published in Webnovel with all rights reserved.

Humans and Mancers have lived peacefully together ever since the second world war. However, one thing hasn't changed. Pyros are still deemed the most dangerous of them all. Having a tradition of rampaging during a surge in power every one hundred years, they were rejected by society, until the beginning of the 21st century when the mainstream media decided to finally accept Pyromancers, but at that point they were already endangered, and the government decided to just finish them off to make sure another ramage doesn't occur. Facing extinction, Maxwell "Max" Mercedes, the last remaining Pyro, has to survive against the anti-pyro government in order to save his kind, but he won't be able to do it without the help of his friends.