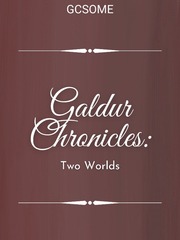 What is Galdur Chronicles: Two Worlds

Galdur Chronicles: Two Worlds is a popular web novel written by the author GC_Some, covering ROMANCE, REINCARNATION, FANTASY, WARRIOR, MEDIEVAL-FANTASY, WIZARDS, DEMONS AND ANGEL, MEDIEVAL-FANTASY ROMANCE, MEDIEVAL DARK FANTASY, BATTLE AGAINST GODS, Fantasy Romance genres. It's viewed by 808 readers with an average rating of 0/5 and 0 reviews. The novel is being serialized to 2 chapters, new chapters will be published in Webnovel with all rights reserved.

Genevieve Galbraith is a 17-year-old girl who lived a relatively good life. Her parents were excellent and treated her very well, she was extremely beautiful and her family had a lot of money. She could be considered perfect if not for a problem. This was a nightmare she had every night, every time she lay down to sleep, fighting in a medieval and magical world, but would always end up dying in the end. Even scared by how realistic he was, Genevieve thought that these dreams could only be part of her own imagination. Except that in the last days, strange things started to happen around her, making her go in search of answers about herself. Until the day when a new student's arrival starts to make things much clearer for Genevieve, since he seems to know her very well, even if they have never met before, and may even know about a past she never imagined to have lived. And the story gets even more confused when this boy takes her to a strange group of people, who affirm their participation in a prophecy in which Genevieve, not only is destined to save a mysterious magical kingdom called Galdur, but was also promised to someone two hundred years ago. Now, she finds herself forced to follow a journey in a magical world with some people who possess, both character and doubtful past, making her question their real intentions in helping Genevieve reunite with her one true self.