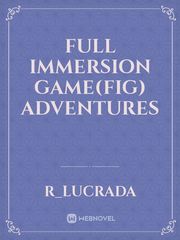 What is Full Immersion Game(FIG) Adventures

Full Immersion Game(FIG) Adventures is a popular web novel written by the author RyuuNamikaze18, covering ACTION, ADVENTURE, COMEDY, GAMING, FIRSTPOV, Sci-fi Romance genres. It's viewed by 5K readers with an average rating of 0/5 and 0 reviews. The novel is being serialized to 5 chapters, new chapters will be published in Webnovel with all rights reserved.

In the year 2021, VR games became a thing of the past. Now, People enjoy the full immersion gear watches. This watch allows the user to immerse their whole body into the game. It’s the most advanced technology created known to humankind. But, truthfully, It’s only one of the greatest things Rin, my husband, has ever done. Not only did he allow people to immerse themselves inside the video game, but he also removed something he called the natural limiters. This allows the users inside to have unnatural abilities called potential. Each person has a different potential, so he also added a level system that allows the player to access a certain amount that potential with each level. A true genius of our time and I’m so proud to be his wife. But, if you ask me, why he built the gear, I couldn’t honestly tell you why. I mean he made trillions from the watch alone, but he was never the type to obsess over money. He’s very selective about the people who he hangs out with, so it’s not for friendships. Maybe it was something that he made on a spontaneously. Even as his wife, I don’t know him well, but I don’t care because I love him. He’s the one who made the impossible, possible with a push of a button.