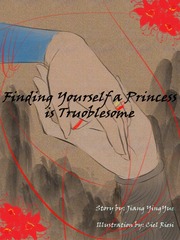 Finding Yourself a Princess is Troublesome [BL]

What is Finding Yourself a Princess is Troublesome [BL]

Finding Yourself a Princess is Troublesome [BL] is a popular web novel written by the author Jiang_YingYue, covering BL, Eastern Fantasy genres. It's viewed by 151.3K readers with an average rating of 4.49/5 and 35 reviews. The novel is over and can be read all 14 chapters in Webnovel with all rights reserved.

Feng XiaLin is a vallant prince in search for a princess to marry. But then some fateful encounter lead him to the clutches of the notorious dark sorcerer, Rong ZhanWu. In order to save the princess, he unwillingly became the sorcerer's slave instead. Or so he thought... ------------------------------------------------------------------------ In YunMing mountain peak of Yin Fang continent, three princesses or princes were always born to the King and Queen. If the first born baby is a girl, then the next children to be born have always been girls. If the first born baby is a boy, then the next children to be born have always been boys. Traditionally, the children of the ruler of Yun Ming mountain peak all have the same genders. In the current regime of Feng, oldest princess was called ShuXi, the middle princess was called LouMei, and the youngest was XiaLin. But unbeknownst to the neighboring peaks, XiaLin is a boy. The King and the Queen are both at lost as to how to deal with their current situation. The invitation for the courting day has already been sent few days before XiaLin was even born. And eighteen years after this, the princes from different mountain peaks will definitely come to court a Princess from the Royal family of Yun Ming mountain peak. As a last resort, Feng XiaLin was raised along with the two princesses. The two princesses would always drag their little brother wherever they go and whatever they do. When they were grown, they always cause troubles together. When they want to seek achievements, they would set their goals together. A time will come when a Princess will be courted, brought her to their home, and soon will rule over a kingdom. But for a Prince, it is always be him doing all of those difficult tasks. That was the way it always been and as far as anyone knew, that was the way that it should always be. But the pampered Feng XiaLin doesn’t know how dangerous the outside world is. Being only a literary person that has no knowledge about martial arts, they could only advise him to wait for a Princess to knock on his Pavilion’s door. But as a man, would he allow that? The answer would be no. There’s no way he will be just sitting inside like a Princess and wait for someone to court him! He will find his destined one even if it turns out to be another Prince! A short boys love Fairytale #LGBT #YAOI #DANMEI #BL #SHOUNENAI #M/M